Yesterday morning, I was walking through the main streets in the center in Sarajevo. I thought that there was nothing special today, the same as yesterday until I saw the people in restaurants watch the TV program. Almost all places were broadcasting the same TV program.

On the screen, a numerous people gathered in the same place which looked like the cemetery. The TV just continueously broadcast the seneary where huge number of coffins were carried over from people to people. I did not know until my friend told me that 11th July was the memorial day for Bosnian people when the genocide was happened at Srebrenica in 1995. According to an estimate more than 8000 people were killed under the command of Bosnian Serb, General Mladic.

On 12th July, I was there at the very place in Srebrenica, where I saw on TV yesterday. About 4 hours bus from Sarajevo, this small town was located very inner part of mountains and forests. When I got to the memorial cemetry, there were little people there unlike yesterday. There was nothing there, nothing but enomous number of white tombstones and newly enshrined 534 green signs.

There, I was kind of shoked at how peaceful this place was. I felt guilty to say this but I was expecting to see some place where I could learn concretly what happened here. But there seemed to be no place other than this memorial cemetery around. Spending just one hour walking around there, I decided to go back. 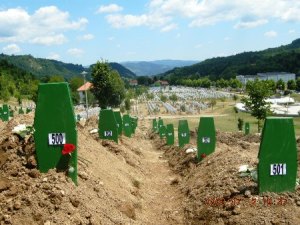 I happened to meet two Slovenian journalists driving back to Sarajevo. We had exchanged some views about the reconciliation process among Bosnian Serbs and Bosnians. On our way back we dropped by on a town in which many Bosnian Serb live in. One of the journalist explained to me “According to serbs, this place was where more than 3000 serbs were killed by Bosniak during war”.

Even though the memorial event at Srebrenica was broadcast all over the country, the Bosnian Serbs just did not care to watch it, pretending nothing special happened yesterday. “The Serb politicians did not even visit Srebrenica” They said. On the other hand, Bosnian people just avoid the discussion about how many Serbian people they killed during war. Their arguments just go in pararell.

The memory of war should not be forgotten. We have to remember these sad incidents so that these will never happen in the future. But what the hell would this word “we” mean? How could we human being include these different groups into the so called “we”? And this is exactly the problem which relates with everyone in this world, needless to say for us Japanese, too.

Currently working for a Japanese consulting firm providing professional business service. After finishing my graduate course at Uppsala University in Sweden (2013), I worked for the European Parliament in Brussels as a trainee and then continued working at a lobbying firm in Brussels(2015). After that I joined the Japan's Ministry of Foreign Affairs, working in a unit dedicating for the negotiations on EU-Japan's Economic Partnership Agreement (EPA/FTA) (-2018). 現在は民間コンサルティング会社で勤務。スウェーデンのウプサラ大学大学院政治行政学修士取得、欧州議会漁業委員会で研修生として勤務（-2013年3月）、ブリュッセルでEU政策や市場動向などを調査の仕事に従事した後（-2015年3月）、外務省で日EUのEPA交渉チームで勤務（-2018年3月）。連絡先：gushiken17@hotmail.com
ぐし Gushi の投稿をすべて表示 →
カテゴリー: EU, 評論・書評・感想, 旅行（全般）, 時事ネタ, 体験ツアー報告 パーマリンク