For these two days. I have been staying in Krakow, Poland. I came here by bus through Vilnius in Lithuania to Warsaw in Poland. I stayed in VIlnius almost one day and half. Vilnius is very beatiful city with baroque style buildings and variety of churches. Vilnus is kind of distinguished from other Baltic countries capitals like Tallin and Riga, for Vilnus has more continental European atmospher, influenced a lot by Poland. 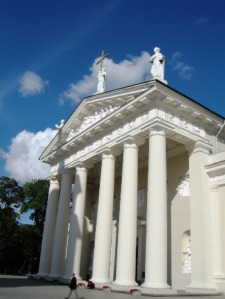 (A Japanese popculture event was going on during my visit!)

Warsaw, the capital of Poland, was very modern and busy city with many big buildings. During war period, this city was completely destroyed by Germany. Even though the old town was re-constructed as it was in the center, since the contruct between new city and old town is so huge that it seemed to me kind of unbalancing city.

But what I enjoyed here was the history museum located in the old town. They showed the detailed history of Poland. especially how they struggled to get independence from other big countries such as Germany and Russia. The exbitions of many resistance attempts under the control of Germany during world war 2 were amazing. This is exactly what people had to go through in order to obtain their freedom and democracy…

Here in Krakow, today I visited Auschwitz a most famous concentration camp, where more than 1 million Jewish people were killed. Unlike my assumpsion, Ausuvtz was very calm and bright places. The land was spreading out in open area, without anything to block us from seeing. I guess there was nothing strange about this place if you enter here without knowing anyghing about it. Some places looked like just ordinary factories, although what they systematically “procuded” there was piles of corpse.

How could human become so cruel to human? History shows that human can become either a angel or devil depending on circumstances. It requires restless effort to keep ourselves on good nature. Reminding us of our history that human can be of evil nature is the only way we can maintain our good sense. 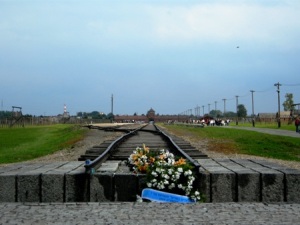 Currently working for a Japanese consulting firm providing professional business service. After finishing my graduate course at Uppsala University in Sweden (2013), I worked for the European Parliament in Brussels as a trainee and then continued working at a lobbying firm in Brussels(2015). After that I joined the Japan's Ministry of Foreign Affairs, working in a unit dedicating for the negotiations on EU-Japan's Economic Partnership Agreement (EPA/FTA) (-2018). 現在は民間コンサルティング会社で勤務。スウェーデンのウプサラ大学大学院政治行政学修士取得、欧州議会漁業委員会で研修生として勤務（-2013年3月）、ブリュッセルでEU政策や市場動向などを調査の仕事に従事した後（-2015年3月）、外務省で日EUのEPA交渉チームで勤務（-2018年3月）。連絡先：gushiken17@hotmail.com
ぐし Gushi の投稿をすべて表示 →
カテゴリー: 旅行（全般） パーマリンク